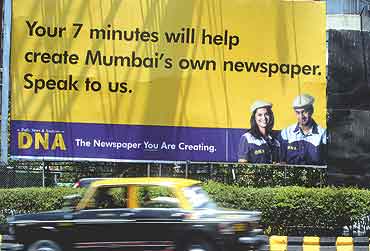 outlookindia.com
-0001-11-30T00:00:00+05:53
For G.B. Shaw, soldiering is a trade like any other trade. So is the media, only it's turning out to be more intriguing and violent. Siddhartha Gupta, the 24-year-old director of Jagran TV, owned by the Dainik Jagran group, says he has received threats from rival TV news channels whose employees have moved to Jagran's Channel 7. The editor of a yet-to-be-launched newspaper in Mumbai adds he'll know about the product's contents only after he joins.

As excitement increases in the media industry, with several new products on the horizon, secrecy is the buzzword as players keep their cards close to their chest. The editorial head of a new news channel screens prospective employees, sometimes at his residence early in the morning, but doesn't issue offer letters fearing they'll be used to drive bargains with other prospective employers. And, logically, security has been beefed up at most media houses.

Diligent Media, a 50:50 joint venture between the Zee group and Dainik Bhaskar, has dragged Bennett Coleman (which owns The Times of India and Economic...