Nothing Academic About It 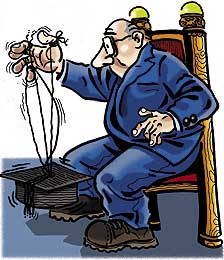 Illustration by Saurabh Singh
Rajesh Joshi June 18, 2001 00:00 IST Nothing Academic About It

outlookindia.com
-0001-11-30T00:00:00+05:53
Is Indian security now under threat from foreign academics? Or is the nda government just out to curb academic freedom, which Indian universities so value? The teaching community is up in arms over a 'secret' home ministry circular which has made "political clearance" mandatory for holding international seminars and conferences. For university and college teachers, who thrive on the seminar and lecture circuit, the ramifications of such an order are nothing short of blasphemous and seem in tune with the bjp-led government's 'hidden agenda'.

According to this order— issued by the ministry of home affairs on September 1, 2000, and circulated by the hrd ministry on January 18, 2001, to the registrars of all universities and deemed universities—this clearance is required especially for participants coming from all neighbouring countries except Nepal. The move has left academics stunned. As one Jawaharlal Nehru University don put it: "This will hamper academic freedom and is aimed at exercising greater government control over educational institutions."