Not For You, Milord

Can creative freedom infringe upon the right to life? The Bombay blasts accused say Black Friday does so. 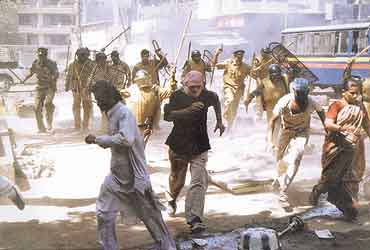 outlookindia.com
-0001-11-30T00:00:00+05:53
Last week one of Bollywood's most talented young filmmakers, Anurag Kashyap, got a new middle name: jinxed. In 2001, his debut film, Paanch, a searing portrayal of the ugly underbelly of urban youth, was banned by the censors for its graphic violence, foul language and scenes of drug abuse. Now, Kashyap's second film, Black Friday, a no-holds-barred recreation of the Bombay bomb blasts of March 12, 1993, has come unstuck, despite a valid censor certificate in hand. This time the issue is not of censorship or ban. Black Friday is on difficult turf, at the centre of a face-off between two delicate issues—that of a filmmaker's creative autonomy and the legal rights of the accused.

In January this year, Mushtaq Moosa Tarani and 36 other accused in the Bombay bombings case had moved court on the grounds that the film would create a bias against them at a time when the court verdict is awaited. Last week, the Bombay High Court imposed a stay on the film's release till the designated Terrorist and Disruptive Act (TADA) court in the blast case delivered its judgement....