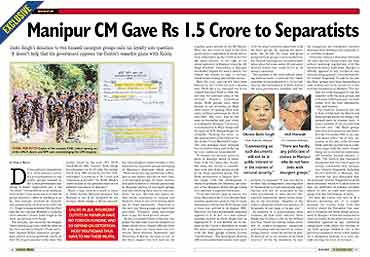 outlookindia.com
-0001-11-30T00:00:00+05:53
The (Outlook expose December 12, '05) of Manipur CM Okram Ibobi Singh allegedly donating Rs 1.5 crore to two secessionist outfits—the Revolutionary People's Fund (RPF) and the Kanglei Yawoi Kannna Lup (KYKL)—has led to demands for his resignation. The central and state BJP leadership and the Opposition in Manipur have also asked for a high-level inquiry to be instituted to probe Ibobi's largesse to the two groups. Army headquarters had forwarded the receipts issued by the RPF and KYKL in Ibobi's name as "evidence" to the Union home ministry which, in turn, informed the PMO.

Senior BJP leader and party spokesman M.A. Naqvi told Outlook, "This is an extremely serious issue and reflects the perils of the soft and friendly attitude adopted by the Congress towards terrorist groups. I am sure this attitude emboldened the chief minister to give money to the two terrorist outfits." The BJP raised the issue in Parliament too, while in the state itself former Manipur CM R.K. Dorendro...