No Rights To The Bill

Morality is like money, its only worth is when all people agree upon a shared value. We are in cowboy country when a nation can't agree on its morals. 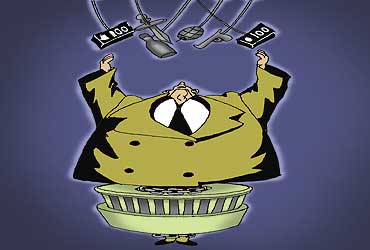 illustration by Sandeep Adhwaryu
Madhu Trehan June 10, 2002 00:00 IST No Rights To The Bill

outlookindia.com
-0001-11-30T00:00:00+05:53
"A modern democracy is a tyranny whose borders are undefined, one discovers how far one can go only by travelling in a straight line until one is stopped."
'The Presidential Papers' by Norman Mailer, 1963

Today we see this generation's Brat Man travelling a very crooked line until he is stopped and often isn't. He lies, cheats, bribes, breaks laws and even murders without any compunction. Our morals have become so lax that I hear the worst criminals not only being defended in society but even admired, and at best, pitied as victims. When a young man drove away with his friends after running over seven people, I heard someone say, "Isn't running away the natural thing to do? You would do the same." If even adults do not know right from wrong, how can the young people of our country? We don't have the Ten Commandments as the Christians have. We don't have a Quran that dictates all your actions. In fact, we do not have one definitive book and that's the dynamic beauty of Hinduism. We are given examples of moral dilemmas entwined in epic stories to provide debate and...