'No Question Mark On Atalji' 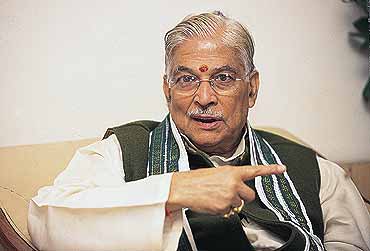 outlookindia.com
-0001-11-30T00:00:00+05:53
You have been attached to the RSS and Jan Sangh where ideology is paramount, personalities are not. But the debate in the party over the PM and deputy PM gives a different impression.
The person and ideology are both important. Ultimately, it is the person who espouses an ideology. During the freedom struggle, some people became representative of an ideology. Mahatma Gandhi, Dr Rajendra Prasad, Madan Mohan Malviya and Purushattam Das Tandon whose lives reflected an ideology. Similarly, Subhash Chandra Bose, Nehru, Gandhi and Patel were honoured as individuals as well as ideologues. If we say there is no need for an ideology, then only individuals and slogans remain. What’s happened is that for a long time, at different levels, ideological clarity has been diminishing.

Why has this happened?
Power and electoral politics is the reason.... The proximity of power dilutes ideology. Now we are in the era of coalition politics. Running the government is the priority. So ideology takes a backseat. One point of view is that if there is good governance then...