No Peace At Gunpoint 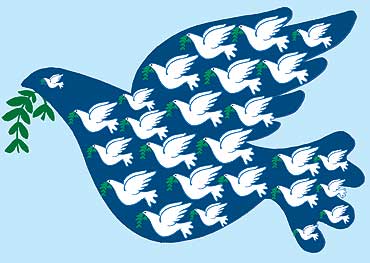 outlookindia.com
-0001-11-30T00:00:00+05:53
Something rather historic happened in Kashmir between August 16 and August 18. Huge numbers of Kashmiris came out on the streets of Pampore (City of Lotuses), a small town near Srinagar, and then in the very heart of official Srinagar, to chant slogans, burn effigies, wave banners, plant green and black flags, demand azadi, and urge India to get out of Kashmir.

Throughout both days the Kashmir police, backed by the crpf, manned sensitive points on the demonstrators' routes, but stayed out of sight. But nothing happened. Not a single head was broken nor a vehicle burnt. Not a single person was beaten, shot, injured or killed.

Hawks in the home ministry and security forces are shaking their heads, declaring it a defeat for the Indian state. According to them, the government should have closed the roads to Srinagar, declared a curfew, put up road blocks at the exit points from sensitive parts of the city, and put the leaders of the Kashmiri separatist parties under house arrest, if not preventive detention.