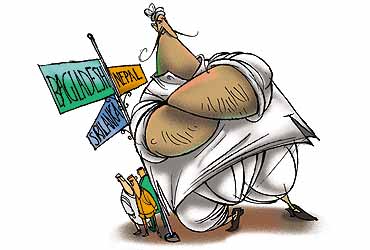 outlookindia.com
-0001-11-30T00:00:00+05:53
By the time foreign minister Yashwant Sinha finished with the SAARC meeting in Kathmandu, and then subsequently travelled to Dhaka to complete his regional circuit (he has already been to Maldives, Sri Lanka and Bhutan) he no doubt realised that relations between India and its neighbours are in urgent need of repair. The latter are restive because Sinha's predecessor, Jaswant Singh, paid scant attention to them, preoccupied as he was with reordering India's ties with the West, post Pokhran, and indulging in coercive diplomacy after September 11.

Says a senior diplomat hailing from the region: "After Pokhran, Indian leaders have visited many countries in the world, neighbours excluded. They have forgotten to put meaningful bilateral content into their relationship with their neighbours. Now India has many neighbours but no friends."

Our neighbours' grievances, though varying from one to the other, include: