The mix of the past and the present is naive and at times downright silly but makes for fun viewing if you do not put your thinking caps on. 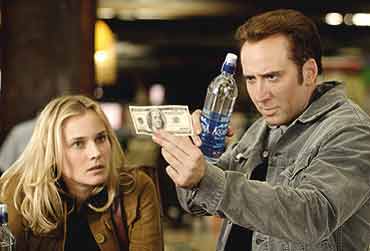 At one level, National Treasure can be dismissed as a sheer waste of the collective acting talent of Cage, Keitel and Voight. But the gentlemen can't really do much here other than just flow with the action and adventure of the narrative. And at times throw some balmy one-liners at the viewers and display loads of languid attitude.

Nicolas Cage is the eccentric and gifted Benjamin Franklin Gates, a treasure hunter whose sole aim in life is to hunt out the biggest treasure in the world, a booty no one believes exists, least of all Gates' own father (Voight). It has been hidden away by the founding fathers of America and they have left clues to the treasure all over—from the dollar bills to the clocks in the churches. The first clue is discovered in Charlotte, a ship unearthed by Gates in the snows of the Arctic. The antique pipe in the derelict ship leads to the biggest link in the chain—a...