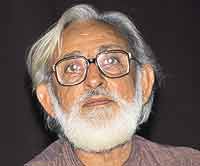 Can such a decision can be implemented?
Legally no. It will lead to a lot of piracy.

Why then do you think the government agreed to this?
If Kannada filmmakers go to the chief minister with a cultural icon like Rajkumar, it becomes difficult for him to say no.

What ails the Kannada film industry?
The quality of films is very poor. Most of them are bad remakes of Tamil and Telugu films.

Are they covering up their lack of creativity?
Yes. Remakes should be stopped.

Why are Tamil and Telugu movies so successful?
Thematically they have better stories. Technically they are superior.

Why have people like you stopped making Kannada movies?
Simple, lack of financial support.

Whom do you count as talented in the Kannada film industry?
Girish Kasaravalli has been making very good films. Commercially there is nobody in the Puttana Kanagal...