I liked Pramod Mahajan. And I'm sure all journalists who dealt with him will miss one of the most suave political players in the Delhi circuit. Updates 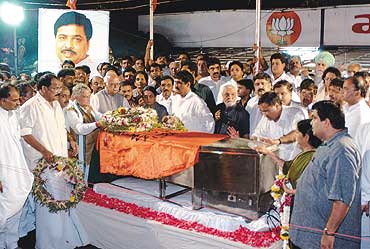 outlookindia.com
-0001-11-30T00:00:00+05:53
The same Shivaji Park neighbourhood where Pramod Mahajan was cremated last week. Cut to five months ago: he is emcee at a high-tech function the likes of which the BJP has never seen before. Most Delhi journalists will remember Pramod as he was that last week of December '05. He even organised a spectacular show of Marathi theatre's classic, Jaanta Raja, complete with horses and elephants. That evening he introduced daughter Poonam to me and a colleague from The Hindu. He was delighted we had loved the show. "I will bring it to Delhi as soon as I find a way to transport the elephants," he joked.

Showmanship apart, anyone who dealt with Pramod would vouch for his sharp intelligence. He shrewdly assessed individuals, then dealt with each at their level. The least ideological of the BJP leaders, he even struck up long-term relationships with journalists opposed to his party. In the nine years I knew him, he never showed any rancour in spite of my frequent run-ins with his party.

On several mornings, I would get a call from his Man Friday, Vivek Moitra:...