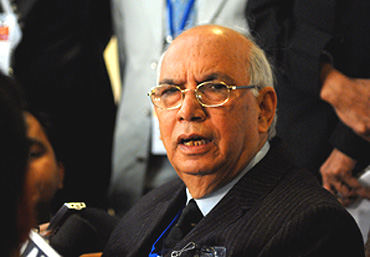 Chandrani Banerjee February 16, 2009 00:00 IST 'Mr Gopalaswamy Is No Angel To Be Painting (Navin Chawla) The Devil'

Do you think the CEC's recommendation in his letter to the President seeking the ouster of Navin Chawla was correct?

No. Gopalaswamy is not a leader. A leader carries his men along and stands by them. In this case specifically, without any ground for such an action, such a recommendation was made to the President. As a result, there is a possibility of election work suffering.

Mr Gopalaswamy's recommendation seems to have once again raised questions about the credibility of Navin Chawla.

Mr Gopalaswamy was home secretary in the BJP regime and Navin Chawla was also secretary with some organisation (the Union Public Service Commission). Both of them are IAS officers. And 'A' and 'B' are in the eye of the people. The issue is with the President. There is mutual acrimony between the two and the CEC has started all this....