In these divisive times, the Hindi film industry has been a remarkably secular and inclusive space. But their take on patriotism throws up questions, and uncomfortable ones at that. 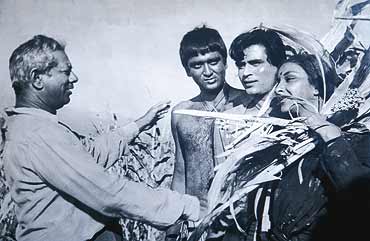 outlookindia.com
-0001-11-30T00:00:00+05:53
In April 2003, when Outlook began the practice of producing an annual Bollywood Special, we conducted a poll amongst well-known Indian directors on their favourite Hindi films of all times. The winner, hands down, was Mehboob Khan's Mother India. The only contemporary film to make it to the top 10 was Ashutosh Gowariker's Lagaan. Gowariker had e-mailed us at the time, saying he hoped ten years later his film would still figure in our top 10. It's not 10 years yet, but our latest Bollywood issue shows Lagaan has not lost its primacy—nor has Mehboob's masterpiece. Our viewers' poll on the nation's favourite patriotic films, conducted in 12 cities across all age groups, has Mother India as the leader followed very closely by Lagaan.

There is a reason for focusing on patriotism. Independent India turns 60 on August 15 this year, making it appropriate to look at how popular Hindi films have mapped the changing, evolving story of this nation. Bollywood may not have the might to change the state of the...