Madonna rules, okay.... Mommies. They have other things to do. And they balance it. 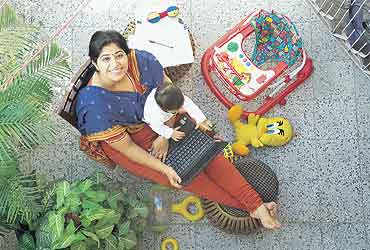 outlookindia.com
-0001-11-30T00:00:00+05:53
Three-and-a-half months old, dimpled cheeks and all, Laila gurgles on a carpet, while her ayah tries to humour her with toys. Every now and then Laila's mother pops in to look at her. Mother, child and ayah are not in nursery but in Miditech, a buzzing Delhi television production house. Pria Somiah Alva, 34, a producer, rushes to where her baby is, after giving her cameraman directions. When her son Rian, now three, was younger, he went along on elephant shoots in Corbett. Sometimes it took a crew to bring up the child.

The lights are on full blast. Leewana, just about five months, surveys the scene and then settles down to play with make-up brushes, while her photographer-mother Sumiko Murgai Tandon, 32, sets up a fashion photo shoot. The bright lights don't seem to bother her: she is a little photographer-in-the-making.

When first-time director Shona Urvashi wrapped up shooting the killing schedule of her film Chupke Se, the one who ended up with withdrawal symptoms was Mokshali, her baby. Urvashi wanted to have the baby and do the film so badly that she hid...