It was a carnivalesque curiosity, but for the rural swathe beneath it, the eclipse may also have infused a modern, rational spirit 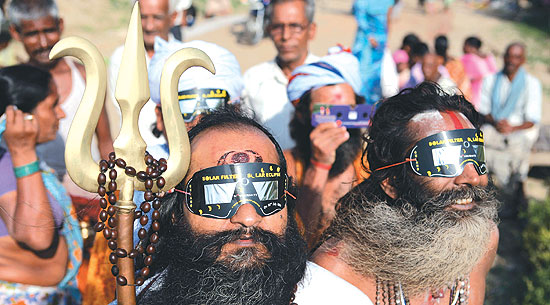 All night they kept arriving, by the tens of thousands, clambering down from the roofs of buses, spilling out of trains. They streamed into Taregna, a tiny railway “halt” that isn’t quite a station—nothing but a nameboard and two benches serving as a landmark for local passengers, who walk across the open track to reach the village at the tail-end of a small town, Masauri. By the time Bihar’s chief minister Nitish Kumar arrived around 4.30 am from Patna, driving on a road built specially for the occasion, and now lined with police and CRPF troops, the public enclosure was already packed, and latecomers had to settle down where they could—along the railway tracks, on electricity poles, on rooftops, some even on top of Masauri’s telephone tower, patiently awaiting a celestial spectacle that tradition had taught them to shun as evil.