Malik is at most guilty of violating FEMA, so why's he in jail? Because Farooq wants Hurriyat out of the polls. So does Pakistan. 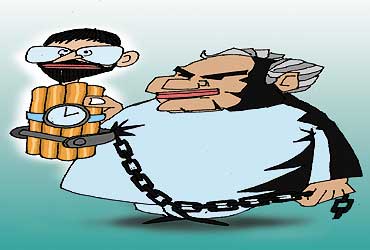 outlookindia.com
-0001-11-30T00:00:00+05:53
The Indian government clearly has a death wish in Kashmir. Just one week after the Pakistani government took fright at the possibility of the Hurriyat agreeing, tacitly or implicitly, to take part in the coming state elections, the Kashmir government and the Enforcement Directorate in New Delhi have slammed the door shut on this possibility and made sure the Hurriyat will not merely not participate but will issue a call to boycott the elections. Pakistan's alarm was manifested by two Pakistan-based, wholly (and still) ISI-controlled organisations, the Students Islamic Front and the United Jehad Council, which issued a death threat to virtually all the Hurriyat leaders and sundry others whom it 'accused' of contemplating participating in the polls. Prominent on this list was Yasin Malik, the most respected of the Kashmiri nationalist leaders in the Valley.

Last week the Kashmir state police arrested Malik under that most infamous of laws, POTO, and sent him to jail. The charge was framed after a lady, Shazia Begum, was arrested with her companion at Kud, on the Jammu-Srinagar...