'Mole ... It's A Four-Letter Word, A Media Preoccupation'

In the Rao government an attempt was made to conduct a nuclear test. The present PM as finance minister was opposed to that test. That test had to be abandoned... 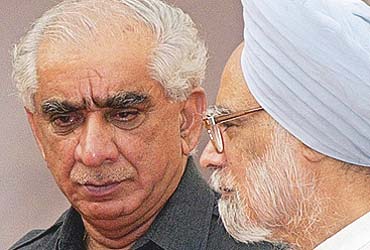 A day after the pandemonium in the Rajya Sabha over the mole issue, Jaswant Singh met V Sudarshan at his offices in the Parliament complex. Unrepentant, pugnacious, combative, Jaswant says he is not isolated in the party on the mole issue.

Is the mole controversy a cheap and shabby publicity stunt for selling your book?

I reject that. The notion itself is so absurd and, frankly, so insulting it belittles the work. This particular book is from my innards, a baring of my soul. My innards are not engaged with cheap publicity stunts. It is a matter of great regret to me that more than 95 per cent of those commenting on this book have not even read the book.

So to what do you attribute this controversy over this mole?

It is really not my word at all. This is a word that is a creation of the media's preoccupation with, if I might put it, four letter words. But otherwise it is conceptually, in description, in commitment, an issue of very serious import, which impinges on the country's national...