Ram Gopal Varma is so confident of this newcomer that he has cast him in four films—James, Sholay, Shiv and King (in a double role). 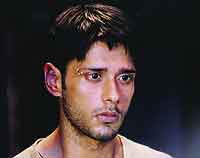 What is so special about James?
It will bring back the genre of the 'hero' film.

Is it a dark film?
I would describe it as an action-love story.

Have you signed an exclusivity contract with Ramu?
No.

Is your pierced eyebrow a style statement?
No. It's part of my body now. Like the tattoo of a shloka on my back.

What inspired you to sculpt your body?
My fat. I weighed 120 kgs a few years ago.

Are you a trained actor?
No. But Ramu put me through a workshop.

Ramu has also cast you as Jai in his version of Sholay.
Given a choice, I would have taken Jai's role too. In the original Sholay, Amitabh Bachchan was the scene-stealer.

The buzz is that you are excellent at fight sequences.
I think so too. But the audience is the...