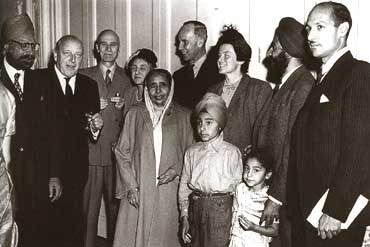 Roli Books
Khushwant Singh October 20, 2008 00:00 IST 'Miss Budden Remarked In My Report Card That I Could Make It As A Writer'

outlookindia.com
-0001-11-30T00:00:00+05:53
I was obsessed with sex. Having never seen a naked woman, I was itching to catch a glimpse. Therefore, I spent most of my free time in the courtyard outside the servants’ quarters of our lone bungalow on Jantar Mantar (now part of Kerala House in New Delhi). It was here that the labourers hired to build South Block came to bathe after their day’s work was done. I spent hours peeping at them in the hope that one of them would lift their flowing skirt while washing and reveal to me her mysteries. Of course that never happened.

New Delhi was in the process of being built, and everywhere was dust and the sound of stone-cutting machines. An Imperial Delhi Railway line sprung up, and we’d often hitch a ride to the site of Parliament House in the 4-5 wagons as the train slowly trundled past our home, loaded with stones.

At school, I was hopeless at all the subjects. And although I was very keen on sports, I wasn’t any good at games either. The only bright point that year was a comment from my English teacher in my report card. Miss...