We might begin by looking at Milk as an oddity but go on to appreciate his tough resolve and struggle. 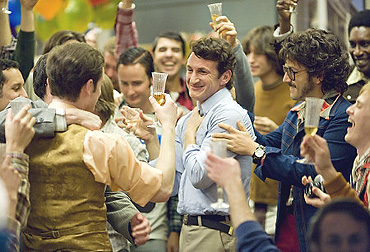 The cinematic journey of Harvey Milk (Penn) —from a ‘queer’ nobody to a member of San Francisco’s board of supervisors, from facing hatred to heading the influential gay lobby—is also a journey of sorts for the viewer. We might begin by looking at Milk as an oddity but go on to appreciate his tough resolve and struggle. What works for the biopic is the empathy that Van Sant creates for Milk and the way he imbues his fight with larger universal concerns. Of course, Van Sant leaves the character in the able hands of Sean Penn who brings the man alive with a rare energy and compassion. There are the effeminate gestures, the way he propositions and picks up his lover from the dingy subway or lets a tiny tear flow for Puccini’s Tosca. But Penn is so well-tuned that not for a minute does his Milk lapse into a caricature. In fact, each of the actors turns in great...