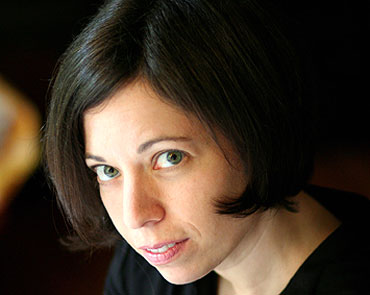 Any first novel is brave. ‘Sadomasochism’ is a simplistic way to describe it. It’s also about how pain and pleasure weaves our lives and how the past and memory remains with us.

An au pair and Indian doctor...? Why Indian?

Because Indian men are the sexiest! No. The book deals with how we’re controlled by our choices and circumstances, so the concepts of karma and dharma fit right in. One way to introduce this was to have an Indian character.

And Bollywood... What did your in-laws say?

You’ll have to ask them!

As Mrs Chandra, don’t you feel the entire subcontinent will judge you?

I began the book before I was Mrs Chandra, but no, I’m not worried about being judged. I had to write this. Writers need to follow their obsessions no matter what any continent will think.

How did you think up the plot?

An episode on a radio series chronicled an anonymous confession line. One involved a man admitting to something he had done...