A World Cup diary from the windward isle... 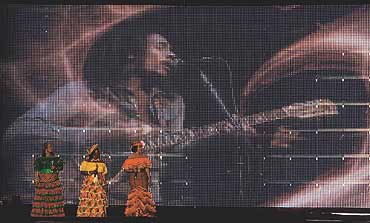 outlookindia.com
-0001-11-30T00:00:00+05:53
When the lights in the Trelawny Stadium went off before the end of the opening ceremony of the ICC World Cup, many took it for a glitch. But it turned out that the stadium had been darkened to make way for a series of music videos by reggae legend Bob Marley. Performing on the podium were his famed backup singers, the I-Threes (above, from left, Judy Mowatt, Rita Marley and Marcia Griffiths), who sang Three Little Birds, Buffalo Soldier and One Love, ending with ‘Don’t worry about a thing, ’cause every little thing gonna be all right.’ Finally, the feeling of the World Cup’s coming to the West Indies sunk in.

What to expect at the World Cup?
It’s still early days and all Cup venues have not yet hosted their first games. But the indication, after the first few games, is that the pitches are on the slower side, but with a bit more bounce than many...