Man On The Dartboard

The 1998 attack on Kurds that gave Saddam his 'monster' tag has now been shown to have been an act by the Iranian army. 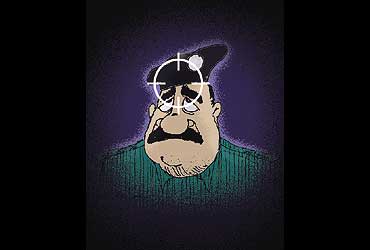 outlookindia.com
-0001-11-30T00:00:00+05:53
In the 13 days that have passed since UNMOVIC head Hans Blix and Mohammed elBaradei of the IAEA pleaded with the UN Security Council to give them more time to complete their inspections of Iraq's suspected Weapons of Mass Destruction programme, the Bush administration has left no stone unturned in its campaign to deny UNMOVIC and IAEA that time and to pave the way for a military onslaught on that country 'within weeks'. Tony Blair has tried to split the European Union by making one-third of its present and soon-to-be members sign a declaration of unity with the US on Iraq. Colin Powell has presented what the US claims are radio intercepts and fresh satellite photographs in support of the US' thesis that Saddam Hussein has been trying to hoodwink UNMOVIC and so is in material breach of the Security Council Resolution 1441. Meanwhile, both Britain and the US have rushed still more troops, planes and ships to the Gulf in preparation for an assault. The message to the rest of the world is clear. The US will not give the weapons inspectors more time and will unleash war soon. It would...