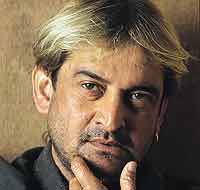 Is the audience ready for such a film?The movie business is youth-oriented now.
The success of Baghban is an eye-opener. It shows that people accept different kinds of films now.

Will Amitabh Bachchan be seen very differently in this film?
Ever since I worked with him on Kaante, I've been writing a script with him in mind. He will have a very different image, one that we've never seen.

Sharmila is acting in a Hindi movie after years. How did you manage to cast her?
I just narrated the script and she agreed.

How was your experience working with Amitabh and Sharmila?
I've never seen such professionalism.

Several real-life heroes/heroines like Medha Patkar were seen at the mahurat.
I wanted to use the platform to tell them how much we appreciate their work. Besides, my protagonist in the film also battles the system.

What about the budget?
It's...