On his play, Seven Steps Around the Fire, premiered in Delhi this week, which explores issues faced by men, women and eunuchs, the third gender. 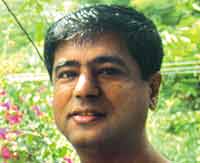 outlookindia.com
-0001-11-30T00:00:00+05:53
Why did you premier 7 Steps...in Delhi, away from Bangalore, your hometown?
I was here for a workshop when we decided to adapt this radio play for stage. Can you believe we pulled this off in just six weeks?

How did you adapt a radio script for stage?
On radio, like cinema, you rapidly cut from scene to scene. In theatre, the physicality of a staging slows you down, so I fleshed out scenes a lot.

What was audience response like?
We were sold out a week in advance, but I was anxious. The third gender is a tricky issue, but people were quite engaged.

Were you ready for a 'peeping audience'?
I was. But as a writer-director, I carefully avoid rewarding voyeurs.

Do you consider yourself a lone gender issue speaker?
I wish more people would explore aspects of sexuality rather than just sex; to that extent, I'm alone.

Are you happy that Girish Karnad is back in Bangalore and writing plays again?
Absolutely! We're neighbours. He's a brilliant, well-informed person whom I love...