'Mahajan Made Me? I Was Driving A Merc When He Had Nothing...'

He's the infamous 'tentwallah' referred to in several newspaper columns. He says he's not a Mahajan creation 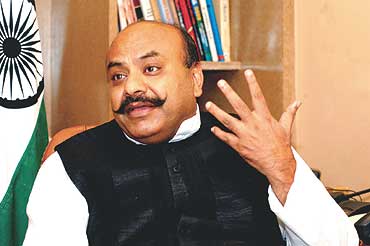 outlookindia.com
-0001-11-30T00:00:00+05:53
Delhi-based businessman and BJP member Sudhanshu Mittal was always seen as a fixture in the world of Pramod Mahajan. He's the infamous 'tentwallah' referred to in several newspaper columns. He too was called in the night tragedy struck 7, Safdarjung Road, and he advised that Vivek and Rahul be rushed to Apollo Hospital. In an interview to Outlook, he says he's not a Mahajan creation. Excerpts:

Vivek Moitra was said to be complaining about you not returning money parked by Pramod Mahajan after his death.
Sick minds are spreading such stories. I had no problem with Vivek and there was no financial dispute.

But it is widely believed that as the BJP's main fund-raiser, Pramod parked money through you.
It's a mistake to see Pramod as a fund-raiser. Venkaiah Naidu raised money for the 2004 Lok Sabha elections, not Pramod. If Pramod lived the good life he did, it was because such a lifestyle came free to him. After he established himself in politics, he never had to pay for anything. It was all free.

You are referred to as the tentwallah...