Musharraf rants about Kashmir because he can't forget the 1971 cut India gave him. Why else would the place turn up all of a sudden 'in their blood'? 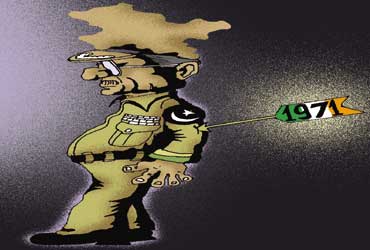 outlookindia.com
-0001-11-30T00:00:00+05:53
Years ago, on a flight to Aspen, a Pakistani man began talking to us. When asked where he was from, he answered, "If I tell you, you will accuse me of having expansionist ideas. I was born in Lucknow." To which my husband replied, "Then you can accuse me of having expansionist ideas because I was born in Karachi." What surprised us was how incredulous the man was. He had no inkling that millions of Indians had left what is now Pakistan. As we continued our conversation, breaking into Urdu/Hindi, sharing jokes, it would have been hard to tell that we actually came from two different countries.

When studying in college in London, my room-mate at the obscenely spinsterish hostel, Crosby Hall in Chelsea (the only place my parents would allow me to stay), was a Pakistani girl studying at the London School of Economics. As we got to know each other, we both found there was hardly any cultural difference between us. We shared the same jokes, broke into Hinglish/Urdlish to punctuate our conversation, told the same kind of lies to our parents, shared our clothes, skipped off for...