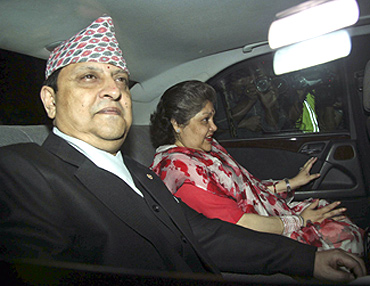 Elements vary, but the essence of the story goes thus. In the 18th century, Guru Gorakhnath—a namesake of the famous Bhakti saint (a reincarnation, in some versions)—visited the palace of Narbhupal Shah, the ruler of the small principality of Gorkha. The wandering ascetic is said to have offered the infant prince, Prithvinarayan, a bowl of curd. Displaying the petulance typical of children, Prithvinarayan threw the bowl to the ground, a portion of the curd spattering his feet. From this ostensibly commonplace occurrence Gorakhnath predicted the future: the curd at his feet...