Genocide, Denial And Celebration
It's an old human habit, genocide is. It's a search for lebensraum, project of Union and Progress. 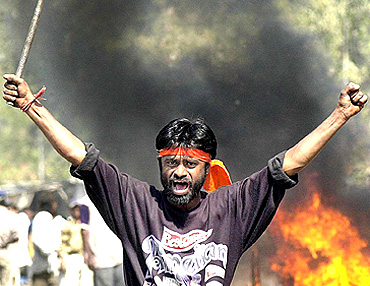 I never met Hrant Dink, a misfortune that will be mine for time to come. From what I know of him, of what he wrote, what he said and did, how he lived his life, I know that had I been here in Istanbul a year ago I would have been among the one hundred thousand people who walked with his coffin in dead silence through the wintry streets of this city, with banners saying, "We are all Armenians", "We are all Hrant Dink". Perhaps I'd have carried the one that said, "One and a half million plus one".*
[*One-and-a-half million is the number of Armenians who were systematically murdered by the Ottoman Empire in the genocide in Anatolia in the spring of 1915. The Armenians, the largest Christian minority living under Islamic Turkic rule in the area, had lived in Anatolia for more than 2,500 years.]

***
In a way, my battle is like yours.
But while in Turkey there's silence,
in India, there is celebration.
***

I wonder what thoughts would have gone through my head as I walked...