Palestine gets an embassy ahead of others 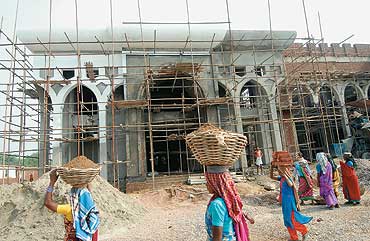 outlookindia.com
-0001-11-30T00:00:00+05:53
It is India's own "land for peace" formula for the people of Palestine—a gift of prized real estate in the heart of New Delhi's coveted diplomatic enclave for their embassy. Palestinian President Mahmoud Abbas himself will lay the commemorative plaque next week during his visit, and formally dedicate the building to the "people of Palestine" as a gift from the "people of India."

With more than two dozen countries still waiting to buy plots at raging commercial rates, the Palestinian 'coup' is turning many missions green with envy.

The land was given in 2003, shortly after then Israeli premier Ariel Sharon visited India. Clearly, there was both symbolism and politics in the Indian government's gesture. Let it not be said that India was beginning to forget words like "struggle" and "solidarity" just because it was moving closer to Israel. A cool 4,000 square metres in the elite enclave, in addition to constructing the new embassy—all gratis—went a long way in balancing interests and tempers.