Lighthouse In The Islands 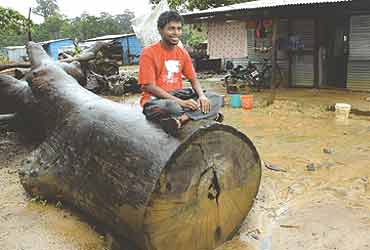 outlookindia.com
-0001-11-30T00:00:00+05:53
It’s a familiar scene on most rain-drenched afternoons on the Andaman & Nicobar archipelago. On one or the other islands, a stream of people carrying a bouquet of broken promises file past a young man. The issue could be compensation the state had assured after the tsunami, free schooling for the children or a hundred others.

Kranti hears them out. "Don’t seek compensation for both the quake and the tsunami," he tells one islander whose house is still standing. "You can only file a claim for your goods, not for your rented shop," he tells some shopkeepers. And so on.

After a couple of days, the Kranti caravan moves on to another island, and to another set of problems the tsunami has washed ashore. The young man who’s deliberately dropped his surname needn’t have got his hands dirty doing this work. After graduating from ILS Law College in Pune eight months ago, he, like his classmates, could have plunged into practice. But Port Blair beckoned. He had done some work during the Bhuj earthquake and the same expertise, he figured,...