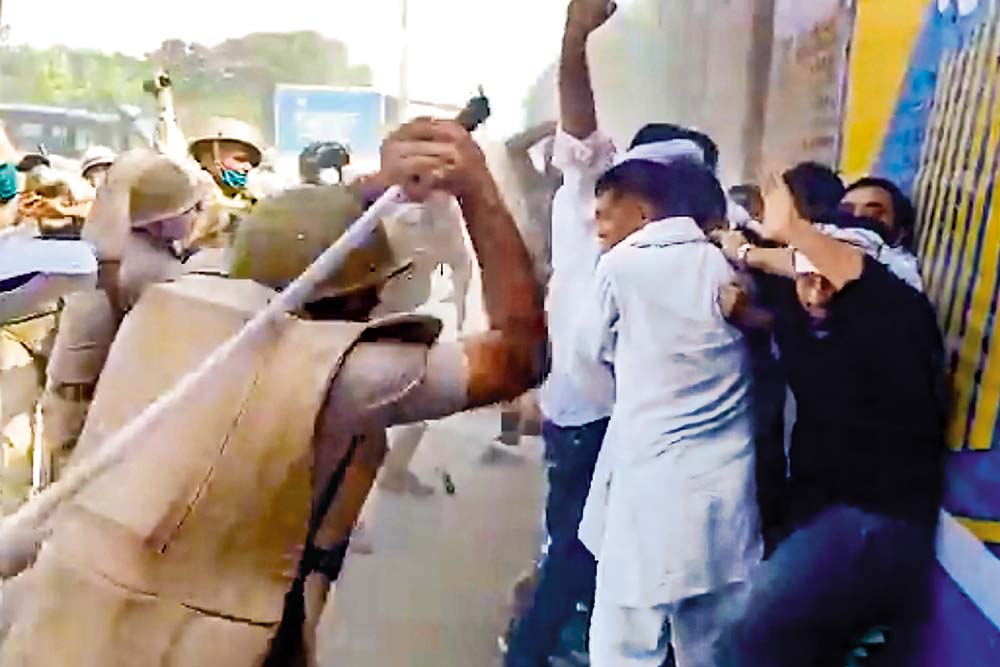 From our colonial past to present-day India, people of all hues—freedom fighters, politicians, activists, the common folk, writers and commentators—have occasionally come face to face with the all-powerful ‘lathi’. The lathi is a symbol of power as epitomised by the refrain jiski lathi uski bhains and also signals support to the needy in the form of a cane.

I was at the receiving end of the versatile cane just recently when I visited Bhoolgadhi village in Hathras and was about to meet the family of a 19-year-old Dalit woman who was allegedly gang-raped by four upper-caste men and died of her wounds a fortnight later.

Fear Is The Key

For a government riding a brute majority and one that typically spends much of its time dismissing political rivals as inconsequential, the elaborate bandobast put in place to prevent us from performing our basic duty as citizen activists, that is to stand with the oppressed, was signalling tremendous fear! I was taken by local officials past a barricade meant to maintain public flow and just as I was being interviewed by a lady journalist, lathis began to rain. In a matter of seconds, the UP ‘Thoko’ Police covered itself in glory as can be seen in the now-viral video. They cornered us and gave us their best impression of Dhoni’s helicopter shot. One young boy from Mathura is still in hospital recovering from blows to his head.

In that precise moment, with lathis being swung at us recklessly, there was no time to philosophise; to sermonise. You had to save yourself, and those around you, for the fight ahead. A fortnight later, even as India has moved on from that image of state brutality to the more pressing discussion on innovative three-in-one wind turbines that can produce power, oxygen and water, I haven’t. It’s perhaps the bruising from the lathi blows, but then I can’t expunge the thought of three persistent burdens from my head, burdens that keep us—the people of Bharat, if not those of India—down.

No Country For Women

First, gender and caste biases persist and within this diverse constituency for atrocities and oppression, it is the women who almost always are targeted for the worst form of hate crimes. What happened in Hathras is only a grim reminder of this reality and, unfortunately, also of the fact that countless more cases as gruesome as or worse than that of Hathras happen around us all the time.

Second, the lathi, an oppressive symbol of colonial power remains the weapon of choice for a modern State against its own citizens; when those in power choose to display their might use the crude lathi and bludgeon to suppress dissent rather than employ more nuanced negotiating or crowd-control tactics. We have been desensitised against violence and are accustomed to police action using lathis. Humne lathi khayi hai is a common refrain, often used with a sense of pride by the ‘beaten’, only emboldening the oppressors for an encore.

Be it a migrant labour escaping an epidemic, farmers agitating for better crop prices, or Opposition leaders, lathi-swinging cops are never far away. The lathi charge on me was, I believe, not only immoral but also in contravention of the UP Police manual which mandates use of force only if a crowd refuses to disperse despite a “clear warning of the intention to carry out a lathi charge”. But then, the state government has been encouraging and institutionalising a culture of impunity and violence in the state police. My grandfather, Chaudhary Charan Singh, had set up the nation’s first Police Commission in 1977 and yet, 43 years later, we are still debating the need for reforms to create a reliable, effective and sensitive police.

Third, how the farmers’ lathi has become a symbol of tyranny. For the farmer—landowning or landless, like the family in Hathras—the lathi has traditionally been wielded as a symbol of protest or social power. For an elderly, it has meant support. For the powerless, it has been a weapon against the brute. Today, as the colonial lathi wielded by the State is getting stronger, each of these other lathis is at a breaking point.