Washington's endorsement of the LoC after Kargil only increased Pak worries and fanned the crisis more. 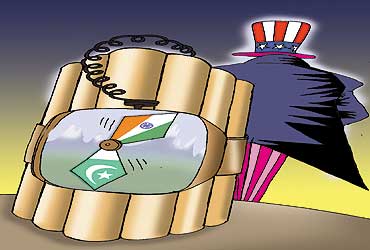 outlookindia.com
-0001-11-30T00:00:00+05:53
Will Washington pay as much attention to South Asia between crises as during them? Probably not. The Bush administration still has much unfinished business with the Al Qaeda network and Osama bin Laden. It is also now deeply immersed in efforts to quieten down the Israeli-Palestinian conflict. Adding high-level South Asian diplomacy to this mix in the absence of heightened war scares or actual conflict would be problematic for an administration that has its hands full and is weak in regional expertise. Besides, the State Department, which would need to take the lead in preventive diplomacy, is risk averse. India and Pakistan are clearly not ready or willing to settle differences, so how could the US possibly fix their political impasse?

The Bush administration applied this line of reasoning to the Israeli-Palestinian impasse as well. For over a year, Bush and his top lieutenants convinced themselves they would not engage in serious West Asian peacemaking efforts till the parties got their act together and demonstrated a readiness to make progress. This strategy proved...