If there was any proof needed that Salman is just a star not an actor, watch Kyon Ki.... 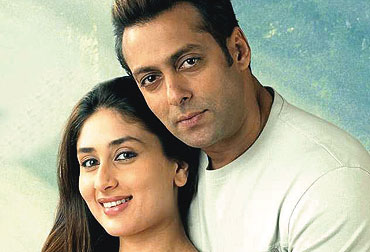 Priyadarshan is a confused man. He can't make up his mind here on how to weave comic moments into an intrinsically sad tale and create something that can reach out and touch his audiences. The result is a tasteless, loud, shoddy film that's far from engaging.

It's unfair to even think of One Flew Over The Cuckoo's Nest or Asit Sen's Khamoshi in the same breath. But the references are obvious. Anand (Salman) loses his fiance Maya (Rimmi) in a freak accident and then loses his sanity as well. He lands up in a bedlam, a place that believes in curing insanity through the strictest of discipline and therapies like electric shocks, lobotomy etc. So he decides to break every rule, demands some music for recreation and makes the ill inmates dance to a perfectly synchronised Goli Mare Tera Dupatta. Anyhow, despite such bad behaviour, two doctors, Sunil (Jackie) and Tanvi (Kareena) try to...