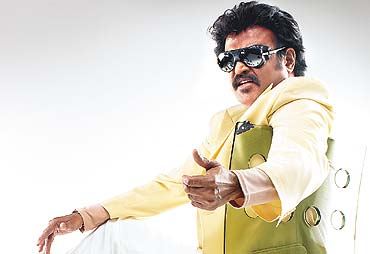 If you are in Palermo, Italy, chances are that you may have watched the latest Rajnikant film, Sivaji: The Boss, a little earlier-- June 14, 6.30 pm at the Dante Cinema-- than the avid Tamil fan in Chennai who would have watched it unspool at about 11 am on June 15. Spectators in Norway, Holland and Australia too shall partake in the frenzy over Rajnikant's 100th Tamil film that invokes the star's real Maharashtrian name, Shivajirao Gaikwad.

It is the first Tamil film to be released simultaneously in the US, Canada, Europe, Singapore, Malaysia, South Africa, Sri Lanka and Australia. With 270 prints in Tamil for the Tamil Nadu, Kerala and Karnataka markets, a record 140 for the overseas market, and as many as 300 prints of the dubbed Telugu version, Sivaji is the costliest Indian movie ever made-- at an estimated Rs 80 crore....