The new slogans on the city's streets: no Saddam, no America 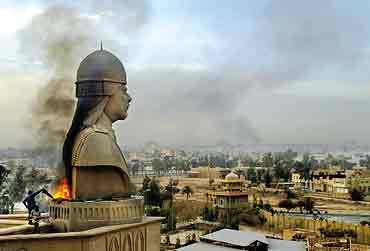 outlookindia.com
-0001-11-30T00:00:00+05:53
I’m in a barber shop in Baghdad’s Karradi district, a relatively affluent area located on the eastern side of the Tigris. I throw up my arms in exasperation at the cacophony of voices that underline the implausibility of conducting a one-to-one interview. They are quite beyond my control, each insistent on expressing his opinion. I decide to let the conversation flow.

"This, all of this, is the fault of Saddam Hussein, no other," says the well-groomed man efficiently snipping at a younger man’s hair. Under his hands, the man getting his haircut counters, "This is what the Americans wanted. The Americans aren’t going anywhere. They’re staying right here and they’re taking over our oil."

"We were led down the wrong path by Saddam," quips a gentleman waiting in the queue. "We were afraid of him before but we’re not anymore. We paid a heavy price and it’s all his fault." And then a new voice rises to add, "The Arabs have become weak. They will be taken over completely. Iraq is just the first step."

On the battered streets and in the lightless homes of...