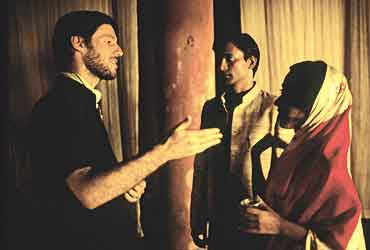 outlookindia.com
-0001-11-30T00:00:00+05:53
Outside: the throbbing big city life, its rumbles and roars, people following cricket. Inside: in the spacious Calcutta office of the Munich-based Fanesfilms, it's business as usual. Receptionists wave visitors to their seats, someone speaks softly on the phone, heels click briskly along the polished floor; informally dressed, immaculately fit Germans, scripts in hand, go about their work: in this place, cricket belongs to another planet.

In comes Norbert Preuss, fiftysomething producer of The Shadows of Time, a Bengali film on a Bengal-based story, and plunges into business straightaway. Director Florian Gallenberger, 31, who won an Oscar for his short film Quiero Ser (I Want To Be) in 2001, is busy shooting. This is the first time a foreign film unit has chosen to handle a patently Indian (Bengali) theme, shooting entirely in India, using the local language. A cross-cultural landmark clearly. But what is the rationale for such a film for a German filmmaker? Preuss looks thoughtful: "The story could be that of India itself. It deals with a person who starts...