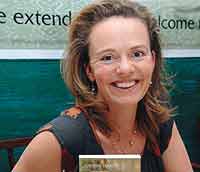 outlookindia.com
-0001-11-30T00:00:00+05:53
Born in England, trained as a journalist in Australia, a globe-trotting travel writer, why set your novel in Kashmir?
I lived in India as a child and have been here for 15 years now. As a journalist covering Kashmir, there were so many stories I wasn't allowed to tell. I thought of putting them into a novel.

Isn't it tough competing with Indian writers in English on their turf?
An outsider sometimes has a clearer eye.

Did you know you'd be up against Salman Rushdie's Shalimar the Clown?
I had no idea. My publisher had put his faith in the book because there have been so few major novels recently set in Kashmir.

When did you hear about Rushdie's book?
At the London Book Fair. I almost threw up.

You launched at the same time—at the Edinburgh book festival. Any comparisons?
No. The two are completely different. Shalimar tries to achieve a vast amount, whereas mine is a small story about small people in a large conflict.

Why an Indian edition?
I've spent almost all my adult...