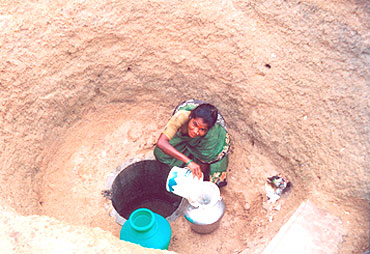 outlookindia.com
-0001-11-30T00:00:00+05:53
Finally, the Supreme Court had to intervene. Acute water scarcity across Rajasthan, Gujarat, Madhya Pradesh, Maharashtra, Uttar Pradesh, Chhattisgarh, Andhra Pradesh and Tamil Nadu has forced the apex court to direct the Union government to produce a blueprint for tackling the problem by August. The court's directive came during the hearing of a PIL filed by lawyer K.M. Balakrishnan on disappearing wetlands. It expanded the scope of the petition to include the water crisis affecting the country.

According to the last assessment in 1993, out of the total precipitation (snowfall included) of around 4,000 billion cubic metres in the country, 1,869 billion cubic metres of surface water and replenishable ground water is available. But topographical and other constraints allow the use of only about 60 per cent.

The water shortage has led to violence as well as panic. Consider this: