The former Pakistani cricket captain on his autobiography, Cutting Edge. Excerpts from an interview with Agha Akbar, sports editor, The Nation, Lahore 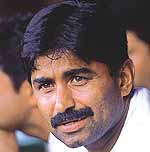 You've avoided issues like match-fixing or ball tampering. Why?
I have, but I could only talk about my days. The problem is evidence. How can you accuse somebody without evidence?

You've also dealt with the player revolts that removed you and Akram as captains.
I had told the then BCCP president that he was doing a wrong thing by removing me for reasons other than performance.

How did it affect the team?
The result was there for everybody to see. Soon eight captains were playing for the team!

Is the team's rebuilding process on track?
Very much so. There are so many youngsters.

Who among them promises to be a star?
It's difficult to say. They are all so talented.

Since your last-ball six, Pakistani cricket seems to have crossed a mental barrier.
It was hyped even more because it came against India. Indeed, it was a turning point for us.

You comments on resuming ties with...