They have their gods, their weddings, their businesses. These Hindus just happen to be living in Pakistan. 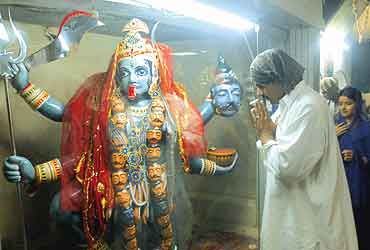 outlookindia.com
-0001-11-30T00:00:00+05:53
Bani is a Gujarati lady with moist red teeth and a wicked gleam in her eye. When she's in a good mood, the ancient temple sweeper with no confirmed human master will admit to being "between sixteen and eighty years old."

She sits at the gate of the Lakshmi Narayan temple, a small impoverished shrine that stands at one end of a creek in Karachi's prime real estate. Four young girls walk to the gate. The sheer beauty of two is completely wasted on Bani, who stops the girls with a wave and asks them to leave: "Muslims aren't allowed in."

"We just want to walk around and look," one of the girls, Rumi, says.

"Then go to the zoo," retorts Bani.

To the conventional secular urban sophisticate, this may sound like the dangerous portent of violent religious conflict. But there is no malice here. The entire exchange on this breezy Karachi evening is just about a marking of territory. The Muslim girls are far from hurt. They plead between giggles. "We just want to pray." Hirakumari, a few months pregnant and related in some complicated way to Bani, tells them, "Go...