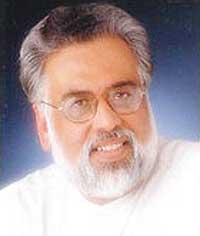 outlookindia.com
-0001-11-30T00:00:00+05:53
How far are you with the making of Sonia?
We’ve written several drafts of the script. And we have an okay from Monica Bellucci to play the role, subject to the necessary money and time arrangements.

Who’s written the script?
Carl Austin from the US, based on the book on Sonia by Rashid Kidwai. It’s all ready for casting and shooting.

When do you plan to do that?
By October-end, once we have the necessary permission.

Do you need permission from Sonia Gandhi?
As a courtesy. Not legally. She’s a public figure, a book on her life has been around. We’re not starting with approaching Sonia Gandhi for her blessings because it would appear like a propaganda piece, which it is not.

Have you spoken to Congress party leaders?
I met a lot of Congress people—Rajiv Shukla, Murli Deora, Sheila Dixit. They liked the idea.

What do you really want to say about Sonia?
The story of a woman who came to...