Isn't That A Different Ourselves?

As long as we claim Paro's wounds as our own, Devdas's sacrifice shall hold its allure 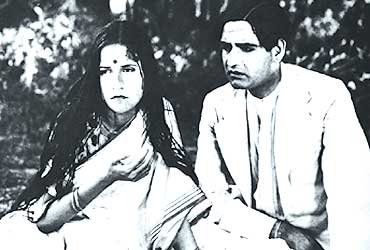 outlookindia.com
-0001-11-30T00:00:00+05:53
I hated Devdas when I was eighteen. I despised this weak, vacillating character living off his family wealth, and intermittently ranting against them and their villainy. With his endless laments and his inaction, he condemned both himself and Paro to eternal celibacy. Anyway, what else but celibacy could anyone be capable of after consuming that amount of alcohol?

I found it reprehensible that Paro was forced to live in such a cloistered world that the only man she was allowed to fantasise about was this idiot. Her choice, due to a lack of other choices, was understandable, but I couldn't for the life of me understand Chandramukhi's yearning. She symbolised to me the few relatively independent women of that time; surely she could have found a better representative of the male species.