Inside The Boxing Ring

The politics of CAS will determine its success or failure. The pluses or minuses don't count Updates 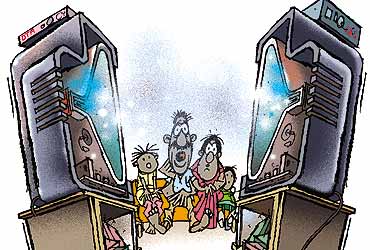 outlookindia.com
-0001-11-30T00:00:00+05:53
There is confusion in the air. At least for the consumers, who are being bombarded with conflicting signals. After all, powerful groups have opposed the introduction of CAS (conditional access system), supposed to be introduced on July 14. For the technology will change the way a cable home views its soap operas, sitcoms and news.

At the moment, the viewer is figuring out how CAS, under which he'll have to pay a minimum rate to watch free-to-air channels (a minimum of 30) and additional amount for the pay channels, will impact his pocket. But powerful sections have already criticised the technology itself. And it seems that the politics of CAS will really determine its success or failure, and not its real economic benefits or disadvantages.

Just look at the scenario. Political parties have voiced their concern over its introduction. Obviously politicians like Venkaiah Naidu, the BJP president who has said that CAS will be introduced only if it's "people friendly", have an eye on the coming assembly polls. They don't want voters to be peeved for any reason.