The battle to be joined is one against inequality, not changing one's faith. 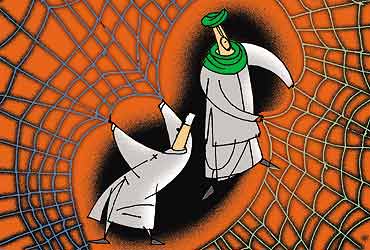 outlookindia.com
-0001-11-30T00:00:00+05:53
The Tamil Nadu Conversion Act's timing and urgency apropos nothing owes more to Ms Jayalalitha's Frailty than Faith. Spurred by the politics of piety, the BJP and the Sangh parivar generally have welcomed the move and called for its emulation. Why? Two years ago, after a visit to the troubled Dangs district in Gujarat, the PM proposed a national debate on the issue and then walked into the sunset. No debate followed. Ms Jayalalitha has stirred one.

The ordinance does what the law of the land substantively provides. It bars conversion by force, fraud or allurement by which is meant temptation, material benefits or gratification in cash or otherwise. Any conversion must be notified to the district magistrate (DM) in a prescribed form. In other words, the State is being empowered to regulate faith and to certify who may change his religious belief, with DMs being called upon to assume the role of national conscience-keepers or a thought police. The Tamil Nadu law mandates registration of religion by the state, whereas secularism, enjoining separation of state from church, is a...