‘We Have Won The Trust Of The Tribals’

Bhupesh Baghel, Chhattisgarh chief minister, discusses his achievements as well as the challenges faced by his government with Outlook’s Editor-in-chief Ruben Banerjee 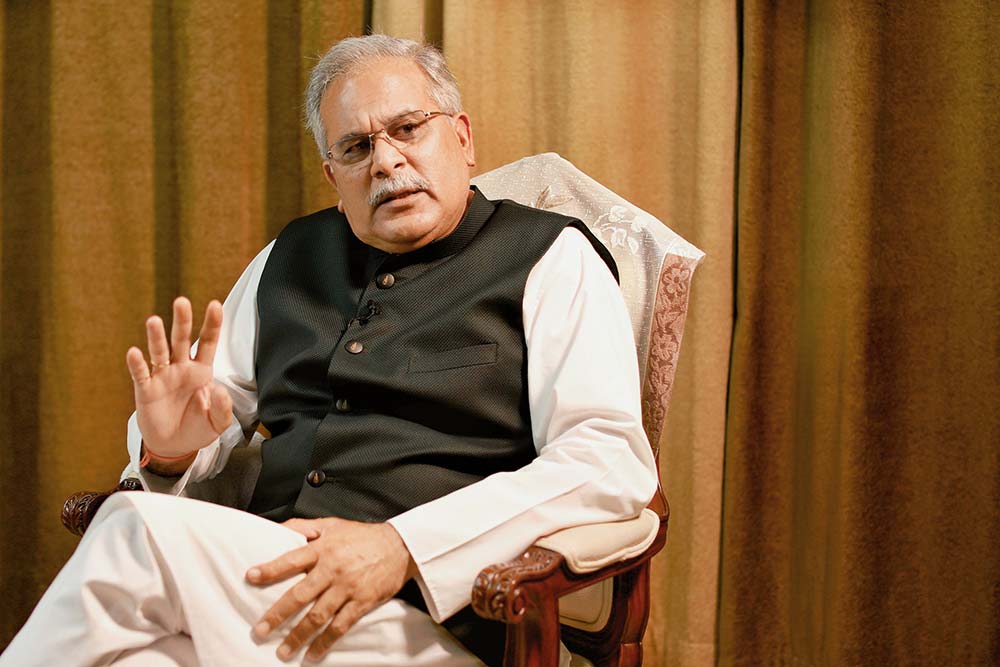 Bhupesh Baghel completes two years as Chhattisgarh chief minister next month. In an exclusive interview with Outlook’s Editor-in-chief  Ruben Banerjee, the 59-year-old Congress leader discusses his achievements as well as the challenges faced by his government. Edited excerpts:

You are going to complete two years as the Chief Minister soon. Looking back, what have been your main achievements in this period?

Chhattisgarh has had many problems to contend with. We are boldly facing them and are tasting success, inc­luding in combating the scourge of malnutrition that has always blighted the state. At least 70,000 children have been saved from the clutches of malnutrition.

Besides, we have worked tirelessly for the benefit of farmers, giving them the highest price in the country. We have also waived their loans. We introduced the Rajiv Gandhi Nyay Yojana for them, under which we are giving Rs 10,000 per acre to everyone, be it paddy, sugarcane, or maize growers. Similarly, our rate for tendu leaf is the highest in the country. On the central list, there are about 17 minor forest produce, but we are buying 31 of them at the minimum support price.

Also, we have undertaken projects in water recharging, and two of our districts, Surajpur and Bilaspur, got first and second place this year in the country. There are 110 ‘Aspirational Districts’ across the country, out of which Bijapur district came first. Under MGNREGA, when the rest of the country was grappling with the mounting unemployment crisis due to Covid pandemic, we provided employment to 26 lakh labourers. My government means business. Today, people do politics in the name of the cow, but if the cow is being served in a true sense anywhere, it is Chhattisgarh. We have made animal husbandry profitable through our ‘godhan project’. In fact, ours is the first state in the world which is purchasing cow dung at Rs two per kg. Shepherds faced problems in eking out a decent livelihood earlier but they are earning Rs 25,000 to 30,000 a month by selling cow dung.

Fine, there have been achievements. But what is it that you could not do in these two years?

Some schemes are, of course, taking time to implement, such as the water recharging projects which will not happen in a day. There are about 30,000 nullahs (streams) in the state, half of which are loc­ated in the forests. Forest areas with rivers, streams and mountains account for 44 per cent of Chhattisgarh and we have begun launching our projects right from there. These may take five years, but with the help of satellites, everything is being done in a scientific manner.

Chhatisgarh has faced the Naxal problem over the years. Has the situation improved?

‘People do politics in the name of the cow, but if the cow is being served in a true sense anywhere in the country, it is Chhattisgarh.’

There is no denying that Naxalism is a problem. But we have a different strategy to deal with it. It cannot be tackled through the barrel of the gun. We have tried to eng­age the local youth by offering them different jobs, we have sought to win their trust by providing development and security in the Naxal-hit areas. We have won the trust of the tribals. During the Corona period, the Centre fixed the price of mahua at Rs 17, but we bought it for Rs 30, its highest ever rate. People felt that this government bel­ongs to them.

We have also focused on dev­elopment. We are recruiting local youth as teachers. We have reopened schools that were closed for 13 years. We have adopted a different rec­ruitment process for Bastar because the children from the area could not study due to the Naxal issue. We have created a separate category for the locals. This is part of our plan.

How did your government prepare for the Covid pandemic?

When the lockdown was ann­ounced, seven lakh people ret­urned home to Chhattisgarh. However, only 26,000 went back from the state because of our good arrangements.We also involved the private sector in our fight and promoted home isolation. Initially, the state had only 300 positive patients. The numbers have since grown, but it is still comparatively low

Was your Poshan (nutrition) campaign affected by the pandemic?

In our state, 40 per cent of people live below the poverty line. Prior to the pandemic, we had linked 66 lakh ration cards to Aadhaar cards. Ration cards were thereafter given to those who were left out at that time and those who came from outside. Chhattisgarh is the first state in the country that gave rat­ion to them all for three months. The people, therefore, did not have to worry about where they would get food from during that time.

Will your government also provide the Corona vaccine free to the people, as the BJP promised in Bihar during the recent assembly elections?

Let the vaccine come first! What will the Centre do? The state government is fighting against Corona on its own. The burden is on us. We provided 4,500 additional beds in Chhattisgarh hospitals, but the number of AIIMS beds here did not increase from its existing 500 to 501.

The Centre is not helping you?

What have they done apart from declaring the pandemic? As far as giving the free vaccine is concerned, now that their government has been formed in Bihar, let them first send it there. Elections are coming in Bengal, they will then give it there. Later, there will be an election in Uttar Pradesh as well. Chhattisgarh’s turn will come only in 2023 if any vaccine doses are left by then.

You have been raising dem­and for Rs 30,000 crore special package for some time. How did the Centre respond to it?

We had demanded Rs 30,000 crore to improve our economic situation and also for the fight against Corona, but we have received nothing so far, except the budgetary amount that is given every year under disaster management. Moreover, the state’s share of GST amounting to Rs 4,000 crore is yet to be given by the Centre. From April to November this year, we received only Rs 350 crore.

Do you think the BJP-ruled states are facing non-cooperation of sorts from the Centre?

Non-cooperation is happening across the country. Even a productive state like Punjab has not been given its share of the money. The economy is not recovering. They are not able to handle it. The rep­ort on the first quarter of GST collections is far from encouraging. Collections have decreased and its size has also reduced. That is another danger.

Are you optimistic that you will remain in power for the next three years?

Absolutely! Why not? Congress will remain in the government for the next three years. When the assembly elections were held, we won 68 out of 90 seats. Then, we won a by-election which took place due to the death of a BJP MLA. Again, after the death of Ajit Jogiji, we won his seat by a margin of 38,000 votes in another by-election. We now have more than three-fourths majority with 70 seats.

What are the new goals you have set for yourself for the next three years?

All those programmes, be it fight against malnutrition or improvement in the economic condition of farmers or any other schemes like water to every household, we have to implement all of them.