Throwing Straws Against The Wind

Crop residue or stubble burning is banned in Punjab and Haryana, but satellite images show a substantial increase in farm fires that add to the air pollution in north India, especially Delhi. 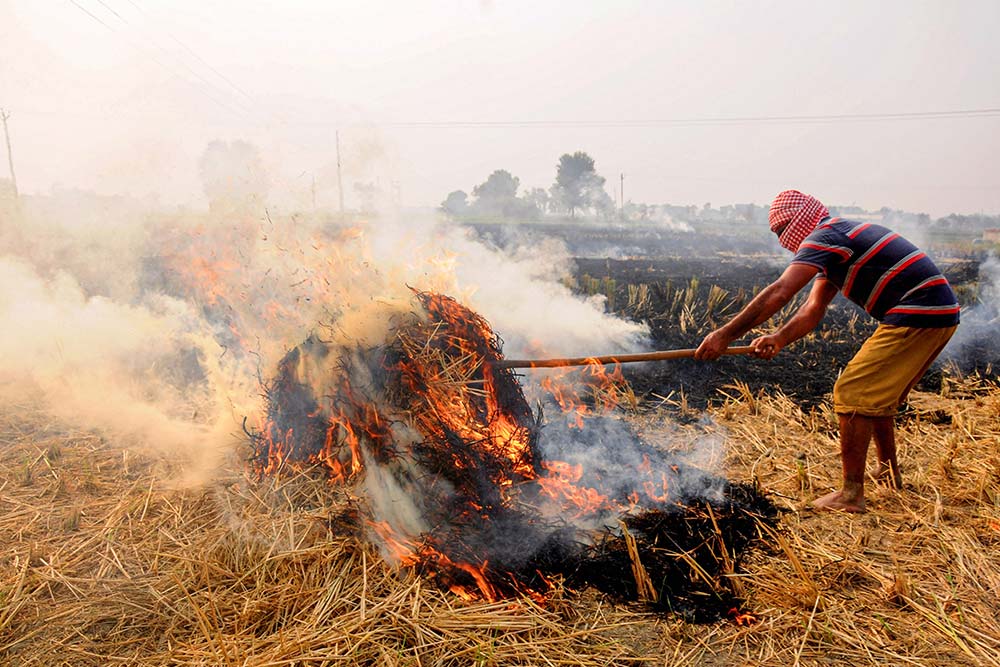 By the third week of September, satellite imagery revealed that the season of stubble burning had begun in Punjab and Haryana. But that is not the real story. Officials estimate that the 1,300 cases of crop residue burning in the first 15  days of rice harvesting is almost six times than the previous year (226 cases). Haryana witnessed 450 cases of stubble burning, three times more than the previous year.

The high rate of stubble burning, despite a ban, comes in the backdrop of farmers’ protests against three new Central farm laws. Farmers continue to defy the ban as there is a short window between harvesting of paddy and sowing of wheat. This is a result of the Punjab Preservation of Sub Soil Water Act, 2009, which mandated farmers to sow their fields in June instead of April. The aim was to ensure that the first monsoon rains would adequately recharge groundwater reservoirs when rice needed it the most. This delayed the time of rice harvest, leaving a very short period of time to clear fields for sowing wheat. For small and marginal farmers, fire is the quickest option; it’s also a main factor contributing to the alarming spike in air pollution in north India.

Punjab’s subsidy of Rs 300 crore to manage paddy straw is yet to make an impact.

Last year, Punjab produced 20 million tonnes of paddy residue. Far­­mers burnt 9.8 million tonnes of it in eight districts flagged as hotspots. Punjab has set up 7,378 Cus­tom Hiring Centres (CHCs) to provide equipment for crop residue management. However, many can’t still afford them. “The high cost of manual or mechanical management of straw is a major reason why farmers choose to burn it”, says S.S. Johal, former VC, Punjab Agriculture University.”

The PPCB has imposed a fine of Rs.10.27 lakh on 389 farmers caught burning paddy stubble this year. “Straw management harvest machines have been made mandatory, 8,000 nodal officers have been deputed, panchayats have been roped in to stop stubble burning,” says S.S. Marwaha, PPCB chairman. Last year, Haryana produced seven million tonnes of paddy residue, of which they burnt 1.24 million tonnes. The Haryana government had told the Environment Pollution Prevention and Control Authority that a committee would look into the progress of bio-CNG and bio-ethanol projects and biomass plants to manage crop residue. The state has set up 2,879 CHCs and 820 more will be established by October-end.

Over Rs 300 crore subsidy on farm machines has been provided by the Punjab government, with 50 to 80 per cent subsidy to farmers and cooperative societies to buy modern farm equipment for management of paddy straw, installing paddy straw-based power plants and running a massive awareness campaign against stubble burning. But these measures are yet to make any significant impact on the ground.

‘Our Clean Air Plan Is A Shot In The Dark’

‘India Will Be Cleaner, Cleaner And Cleaner Year After Year’

How To Not Waste A Crisis

The Trash We Inhale