‘There Is Yearning And Churning Among Muslims’ 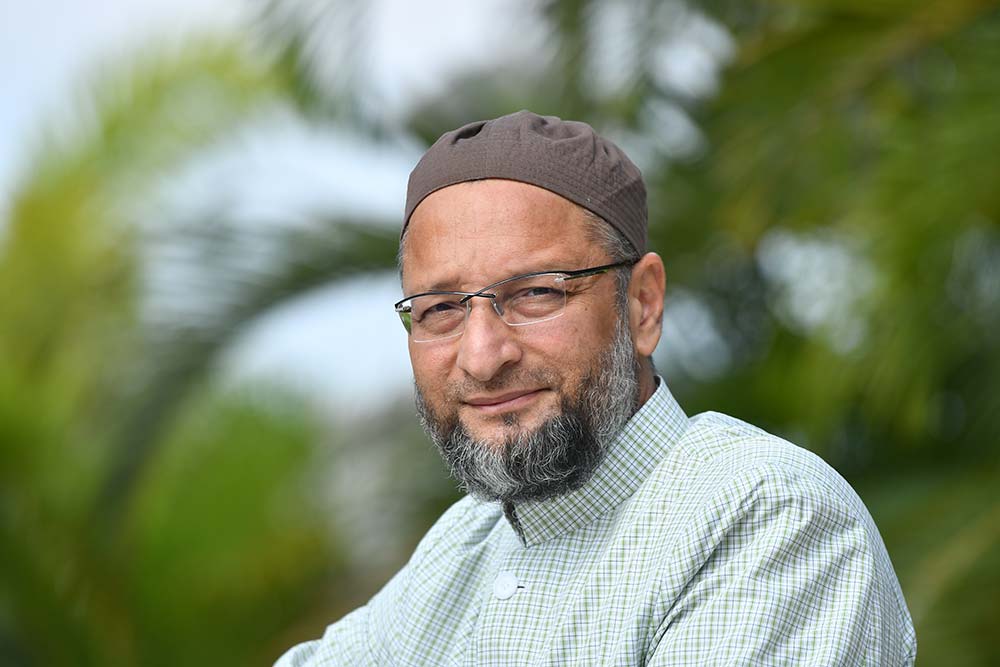 Photograph by P.V. Sivakumar
Bhavna Vij-Aurora November 20, 2020 00:00 IST ‘There Is Yearning And Churning Among Muslims’

There is nothing circumspect about the politics of Asaduddin Owaisi, 51, who is in the spotlight after winning five seats in the recent Bihar assembly elections. The media-savvy, four-time MP from Hyderabad tells Bhavna Vij-Aurora that organising iftaar parties, felicitating maulanas and attending Muslim functions do not make political parties secular.

Your party’s performance in Bihar came as a surprise…

Nobody seems to be happy. From Taslima Nasreen to Arvind Kejriwal, everyone is cursing me.

How do you explain your party’s performance?

What is happening is the result of yearning and churning among the Muslim community. They are seeking representation on the country’s political platform. This has not happened overnight. It is the result of injustice done by all political parties, including the Congress and the BJP. This was bound to happen. If you push someone down to  the bottom, then the only place they can go is up.

Is there increasing disenchantment among Muslims towards secular parties?

“Why are only Muslims being pressurised to carry the burden of this non-existent secularism? It is a burden every Indian has to carry.”

The present-day youth are aspirational and ambitious. The parties talk about saving secularism. Why only we are being pressurised to carry the burden of this non-existent secularism? It is a burden every Indian has to carry. There is a difference between secularism guaranteed by the Constitution and political secularism. The so-called champions of secularism, pluralism and diversity have done nothing except setting up committees.

There were communal riots all over and no closure. What happened with Sikhs in Delhi in 1984? Riots happened in northeast Delhi recently. Mosques were being burnt and people massacred but chief minister Arvind Kejriwal, like a coward, went to sit at Gandhi Samadhi. He did not have the guts to go and meet the families. I understand that law and order is not in his hand but what stopped him from going to the riot-affected areas and stand with the people? If I am making him feel insecure, it’s good. Let him feel insecure. Despite getting such a huge mandate from people, Kejriwal has failed to do anything. He supports the abrogation of Article 370, which is against federalism. And then he wails about lack of powers for his government. It is these parties that are responsible for the BJP coming to power.

Political secularism is a farce to deceive minorities and Dalits. It is used to gain power and then forget. Peo­­ple can’t be deceived forever. That is why you have Imtiaz Jaleel winning from Aurangabad. Prince Charming had to run to Wayanad that has 30 per cent Muslims. And yet, I am called a vote-cutter.

ALSO READ: Look Back In Denial

When the Constitution talks about equality, it is about equality among unequals. Articles 29 and 30 protect the right of minorities, and grant them the right to establish educational institutions. It is about justice and liberty. Laws like the CAA and NRC violate the right to equality and they are not about secularism. The problem is that the so-called secular parties have stopped taking a stand on such issues. Their fear is that if they say something, BJP will benefit.

People are calling you a vote-cutter…

Majority of the Muslims voted for the Mahagathbandhan, not for me. The question needs to be asked, why couldn’t they still defeat the NDA. Every social group—Bhumihars, Brahmins, Yadavs, SCs, STs and EBCs—voted for the BJP. The RJD has been shouting from rooftops about their M-Y (Muslim-Yadav) vote-bank, and yet their tallest leader, Abdul Bari Siddiqui, lost to a Yadav candidate of NDA from Keoti in Darbhanga. Despite such high anti-incumbency the Mahagathbandhan could not defeat the NDA. And then they blame me for weakening secularism.

Did the MGB approach you to be part of their alliance?

No. The MGB did not app­roach us. I went and spoke to two-three RJD MPs around seven months ago in the Central Hall of Parliament. I told them that my party has been working in the Seemanchal area for the past four years, and that we polled three lakh votes in the Lok Sabha elections. One of them was courteous but did not commit anything. The second one was blunt and asked me why am I contesting...I cannot beg for an alliance. In all modesty, I can say that we tried. Don’t blame us now.

Did you expect to win five?

If you map the top 10 backward districts of the country, four will be from Seemanchal. The literacy rate is less than 35 per cent. There are no degree colleges. Seemanchal was the worst-affected by floods. People are not fools. They are seeing through the leaders who have won five times but done nothing for the people.

But do you think NRC/CAA will be big issues in West Bengal and in Assam?

“It is extremely unfair to call me the new Jinnah...I am in politics to destroy radicalisation. My forefathers took the right decision to stay with India....”

Absolutely. CAA has to be seen through the prism of NPR (National Population Register) and NRC. This has been the biggest disruption by the BJP-led government. In 2010, NPR had nothing to do with the CAA. Now the two are closely tied. BJP and (RSS chief) Mohan Bhagwat can give flowery statements but we are not small children to believe them.

There was a Supreme Court-monitored NRC for Assam , and the BJP still wants to delist categories of people, mainly Muslims. They want another NRC.

Will you contest in Bengal?

We will definitely contest. Winning or losing doesn’t matter.

ALSO READ: Only The Tall Get Gaud

Do you anticipate similar all­egations of being a vote-cutter in Bengal?

BJP won 18 seats in Bengal in LS elections without me contesting. The social, economic and health indicators of Muslims, who constitute 28 per cent of the population, are very poor. When you ask the government what has it done for them, all they have to show are iftaar parties, felicitation of maulanas and attending Muslim functions.

How will empowerment of Muslims happen?

Look at the Telangana model of KCR. They run residential schools for minorities. More than 60,000 students study there. Their standard of education is fantastic. There is a huge change in the lives of Telangana Muslims. There is so much demand for these residential schools that they have to hold an entrance test now. That’s what we want.

Empowerment comes from political representation in India. That’s the crass reality of politics in India. Other social and religious groups have disproportionately high representation. Why are not Muslims represented as per their population? Even those Muslims elected from the secular parties don’t have the real power to represent the interests of the community.

There is a realisation among the Muslims, and it is not because of me. I don’t take credit for the change but it’s definitely good for democracy. And it’s high time that the diversity and pluralism gets reflected in the numbers.

There is a division among the Muslims too. The Pasmandas identify themselves as backward and claim you represent the upper caste Muslims…

You have been called the B-team of the BJP…

I am tired of being the B-team. I want to be the A-team now…I know my party is creating dissonance. It is giving sleepless nights to others. That’s good. My political journey has not been easy. I have been in jail. I was beaten. My patience has been tested. They can call me any name. All these allegations don’t have any impact on me. It is like water off a duck’s back.

You say your journey has not been easy…

When Akbar (younger brother Akbaruddin) and I were 13-14-year-old, RSS goons used to come to our house and shout ‘Owaisi, kabristan ya Pakistan’. I cannot ever forget those days. They are etched in my memory. Sadly, such things are still happening in the country. In Madhya Pradesh, Muslims selling firecrackers are threatened. People in power don’t want to stop it.

You have been compared to Mohammad Ali Jinnah…

It is extremely unfair to call me the new Jinnah. It is complete injustice. I am in politics to destroy radicalisation. My forefathers took the right decision to stay with India and to reject Jinnah. Jinnah had visited what is our political office now. There is the Indian flag flying there. I don’t need to say more.