In Battleground Bengal, TMC Pulls Out Corruption Gun In Mamata Vs Dhankhar Face-Off 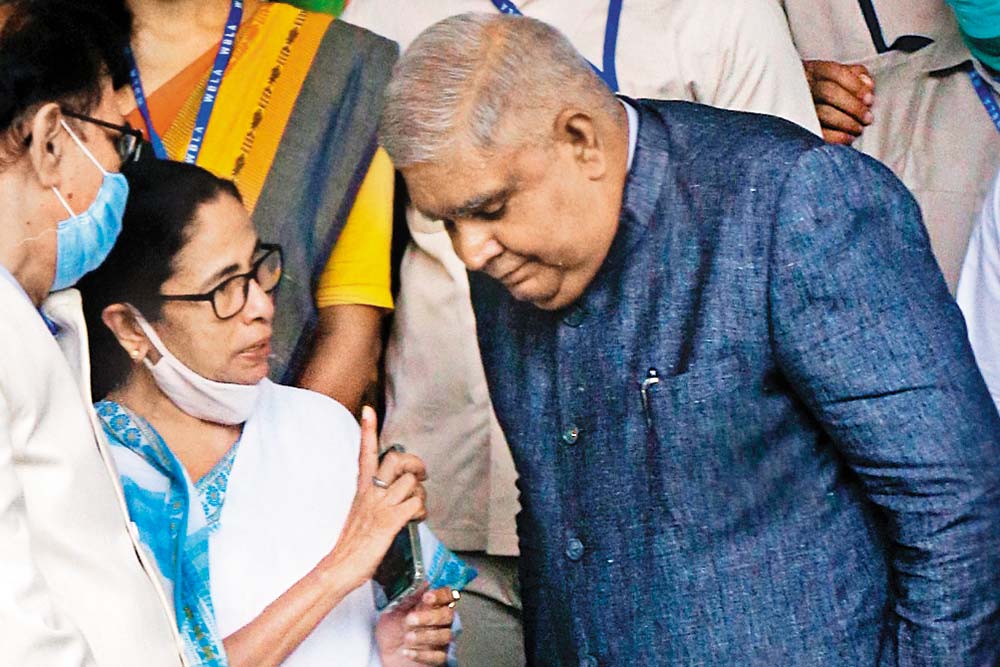 Telling Him Like It Is
Mamata Banerjee makes a point to Bengal governor Jagdeep Dhankhar
Photograph by Sandipan Chatterjee
Snigdhendu Bhattacharya July 07, 2021 00:00 IST In Battleground Bengal, TMC Pulls Out Corruption Gun In Mamata Vs Dhankhar Face-Off

Ever since his appointment as governor of West Bengal in 2019, Jagdeep Dhankhar’s comments on politics and administration of the state have repeatedly raised the hackles of the Trinamool Congress government. The verbal joustings of the belligerents have been marked by spirited displays of cut and thrust, of parry and riposte. Now, the battle between Dhankhar and the TMC has taken a rather intense turn over the past few weeks, with the party targeting the governor over the alleged lack of personal integrity.

Though the Dhankhar-TMC relationship has been sour from the beginning, Dhankhar has been predominantly targeted by the TMC for allegedly working at the behest of the BJP, trying to disrupt the state government’s functioning and thus crossing his constitutional limits. The biggest salvo came from chief minister Mamata Banerjee herself, when on June 28 she said that Dhankhar was a “corrupt” person who had his name on the charge-sheet of the Jain Hawala scam, but who later got it removed by app­roaching the judiciary.