The Man Who Came In From The Cold 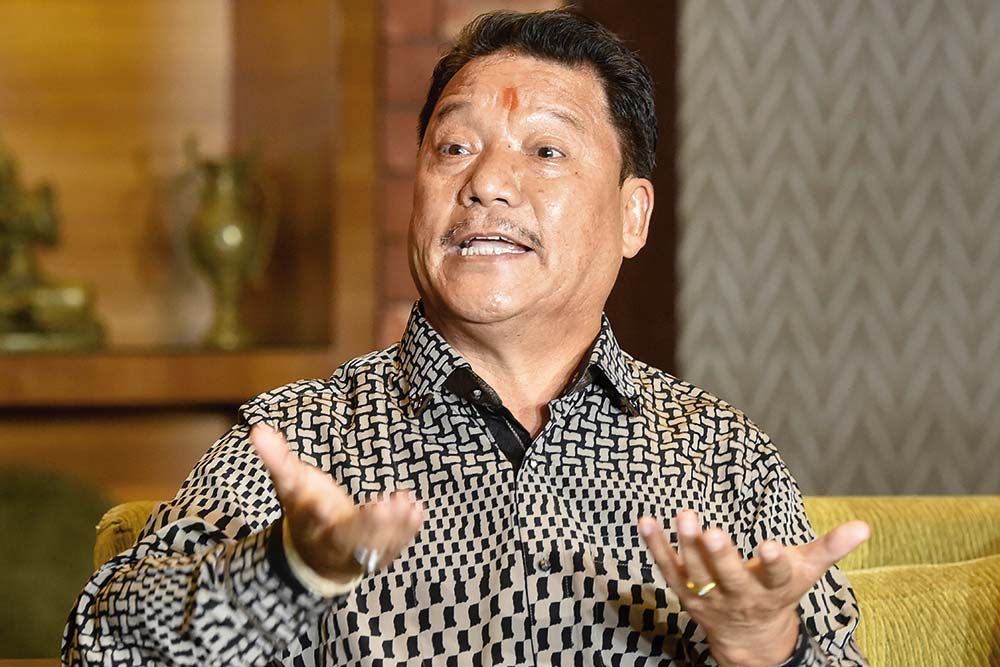 The Coat Turns—Bimal Gurung ‘quit’ the BJP, ‘joined’ the Trinamool
Photograph by PTI
Snigdhendu Bhattacharya October 28, 2020 00:00 IST The Man Who Came In From The Cold

Bimal Gurung reappeared as mysteriously, and dramatically, as he had vanished from public view three years ago. Even more dramatic was his announcement last week on severing ties with the BJP, a party his faction of the Gorkha Janmukti Morcha (GJM) helped establish base in the Darjeeling hills. But that is only half of the unfolding story—Gurung’s perceived surrender to West Bengal chief minister Mamata Banerjee has, by all likelihood, deepened the political complexities in Darjeeling, where the demand for a separate state of Gorkhaland, comprising parts of northern Bengal’s plains, has been the dominant theme for decades, especially since the mid-1980s.

Gurung, 56, who ruled the hills between 2007 and 2017, was instrumental in helping the BJP win the Darjeeling Lok Sabha three times on the trot since 2009. While snapping ties with the BJP on October 21, Gurung accused the BJP of breach of promise and doing nothing for Darjeeling.

The GJM leader had remained a fugitive since June 2017, when the state police filed dozens of cases against him, mostly under non-bailable sections of the Indian Penal Code and the anti-terror law Unlawful Activities (Prevention) Act. He has reportedly stayed in hiding in Sikkim, Nepal, New Delhi and Jharkhand, and was spotted rarely—one such being the wedding reception of BJP national president Jagat Prakash Nadda’s son.

However, his video and audio messages calling for revenge on the state’s ruling party, the Trinamool Congress (TMC), for the police atrocities during the 2017 agitation (which sparked following a government proposal to make the Bengali language compulsory in state-run schools across Bengal, including Darjeeling, where the majority of the people are Nepalese) did the trick for the BJP, as the party won the Darjeeling Lok Sabha seat with a margin of more than 4 lakh votes in 2019. This was despite the GJM faction led by Binay Tamang, which broke away in September 2017, siding with the TMC. The BJP never promised Gorkhaland. In the 2009 and 2014 polls, the party promised to “sympathetically consider” the long-pending demands of the Gorkhas and its election manifesto in 2019 spoke of a “permanent political solution” for the hills.

Now, with Tamang and Gurung both siding with Mamata Banerjee, who has vowed to prevent partition of Bengal, is the GJM’s clout set to wither after being the dominant outfit of the hills since 2007? The political history of the hills show that the local population, especially since the rise of the late leader Subash Ghising’s militant Gorkha National Liberation Front (GNLF) in the mid-1980s, have voted against the power that ruled Bengal—be it the Left Front or the Trinamool. “Gurung’s switchover creates a vacuum in the hills politics as both factions of the dominant party has now joined hands with the TMC. This creates space for GNLF to resurge,” says a Darjeeling resident who does not wish to be identified.

The two-year violent agitation led by Ghising between 1986 and 1988 ended with the formation of the semi-autonomous Darjeeling Gorkha Hill Council (DGHC). The GNLF called the shots in the hills since then, but it had to shut down its offices in 2007 after Bimal Gurung, once a close aide of Ghising, broke away to form his own party, the GJM, and launched another round of militant movement seeking statehood. Gurung’s rebellion finally ended with the formation of the GTA, which enjoys greater power than DGHC, in 2011.

The GNLF, now led by Subash Ghising’s son Man Ghising, made a comeback since the 2017 agitation, when Bimal Gurung allowed space to other hill-based organisations apparently in the face of Mamata Banerjee’s aggressive counterattack.  In 2019, the GNLF joined hands with Gurung to support the BJP in the Lok Sabha elections and in the ass­embly byelection in Darjeeling, held sim­ultaneously. GNLF leader Neeraz Zimba Tamang won as a BJP candidate, though he continues to be a GNLF leader. According to local politicians, public sentiments against police excess during the 2017 agitation forced GJM and GNLF to patch up.

On the day Gurung resurfaced in Calcutta and announced alliance with the TMC, Darjeeling Chronicle, a website that openly declares support for a Gorkhaland state, wrote that it hopes “the end of GJM will mark the end to politics of selfishness and opportunism”.  The article carries on: “If Gurung and his party are under the assumption that the MP and MLA elections reflected their stronghold, since it was won with overwhelming numbers because of Bimal Gurung… sorry to burst your bubble. The people en masse voted for BJP because the rest were all compromised with TMC.”

The GNLF, too, took digs at him. “Gurung has betrayed the Gorkhas of the world. We believe the BJP can keep its promise of permanent political solution,” says GNLF spokesperson Mahendra Chhetri. Harka Bahadur Chhetri, a former GJM MLA from Kalimpong who founded the Jan Andolan Party (JAP) in 2016, portends that  Gurung’s ‘surrender’ will create more confusion in the hills. “For the time being, a single party won’t have the last word in the hills and all parties may get a level playing field.”

According to Parimal Bhattacharya, author of the book No Path In Darjeeling is Straight, politics in the hills have now become all the more complicated and has, perhaps, hit a dead-end for the time being. He cited the absence of a single political identity strong enough to deal with Delhi or Calcutta as one reason, and the split in the larger Gorkha identity, which has been based on Nepali language, as another for the loss of strength of the Gorkhaland movement.

Since coming to power, Mamata Banerjee constituted separate development boards for as many as 15 ethnic groups who speak Nepali and disbursed funds for these specific communities through the board representing them. “With both factions of the GJM turning pro-Calcutta, the latest development may well signify the end of the GJM. The Gorkhaland aspirations may have hit a dead-end until a new formation or face springs up,” Bhattacharya says. He sees an infusion of youth power into local aspirations following the return of a young migrant workforce due to the Covid-spurred lockdown. This may trigger a fresh agitation.

TMC is trying to portray Gurung’s return as an example of Mamata’s success in fostering peace.

A schoolteacher in Kalimpong says Gurung’s 2017 protest was prompted by Mamata Banerjee’s success in gaining grounds in the hills. In May 2017, the TMC made history when it won the Mirik notified area elections, besides a few seats in Kurseung mun­icipality, becoming the first mainstream political party to win any election in the hills for three decades. In June, Gurung resigned from the GTA and launched his protest, which turned violent. “Gurung provoked the government with violence and the resultant police exc­ess turned the people against the government,” the schoolteacher surmises. During the 2017 agitation—the hills shut down for 104 days on Gurung’s call—11 protestors died, allegedly in police firing, and one assistant sub-inspector was killed. Losses in terms of destruction of government and private property, including tourism infrastructure, was in crores. Hundreds of GJM supporters had to flee their homes after multiple police cases were slapped against them.

According to Biswanath Chakraborty, a professor of political science at Rabindra Bharati University in Calcutta, both Gurung and the chief minister will find it difficult to explain the alliance.  “Additionally, the TMC will have to deal with the power struggle between Gurung and Tamang, especially with Tamang, working together with the state administration, helped restore peace in the hills and is working hard to take away Gurung’s grounds,” Chakraborty says.

The TMC is trying to portray it as another example of the chief minister’s success in moving towards peace from militancy, just how she restored peace in the Maoist-dominated Jangalmahal area in southwestern Bengal.

In the hills, though, workers of the Tamang faction took out a rally on Monday, shouting “Bimal Gurung Murdabad”, and vowing not to allow him to enter the hills.  “Gurung should acknowledge he was wrong and we were right in 2017,” says Anit Thapa, the chairman of GTA’s board of administrators. “Gurung is not welcome in the hills because he means violence.” In 2007, Gurung did not allow Subash Ghising to enter the hills after a fortnight-long trip to Delhi. History has come a full circle for the man who wears many masks.

By Snigdhendu Bhattacharya in Calcutta